An Autonomous Mobile Robot (AMR), also known as a Self Driving Robot, is a trackless, unmanned mobile carrier integrated with autonomous positioning and automatic navigation. Through sensors, AMR detects the surroundings and autonomously plans the optimal route through map collation around obstacles; similar to a vehicle with GPS and map capacity. With its trackless and autonomous-driving characteristics, AMR can be regarded as a small Unmanned Vehicle on land, water, and in the air, as UGV (Unmanned Ground Vehicle), UAV (Unmanned Aerial Vehicle), USV (Unmanned Surface Vehicle), and UUV (Unmanned Underwater Vehicle) are all part of the AMRs.

Currently, AMR is mainly used in the industrial logistics of industries such as consumer electronics, auto, alternative energy, semiconductor, etc., integrated with production and warehousing logistics. Within the foreseeable future, industrial logistics will remain the core space for AMR applications; however, with the continual progress and upgrade in AMR technologies, its application will become broader. Looking ahead, AMR will thrive in not just smart manufacturing but also other industries like smart medicine, smart logistics, and smart retail, etc. As AMR technologies are also the critical technologies associated with Autonomous Driving System (ADS) and Vehicle-to-Everything (V2X), many industry players regard AMR as the testing verification for their development technologies; therefore, the advancement in AMR represents further stride forward in the pursuit of intelligent transportation.

Customized unmanned vehicles, based on the AMR, have been introduced into different domains for testing, such as:

Apart from the indoor domain applications mentioned above, there have been instances of AMR testing in outdoor domains such as food or online shopping delivery, which is a new logistics in testing. As the enormous transportation demand in e-Commerce has driven innovation in logistics, which has rendered itself the pioneer in outdoor AMR operations, Unmanned Delivery Vehicles have been deployed to deliver packages. For example, packages are delivered to the living community or the doorsteps of the customers through land-based UGVs with flying drones, as well as the UAVs delivering documents and small packages for government agencies or corporations, and six-wheel roaming vehicles traversing the cities. 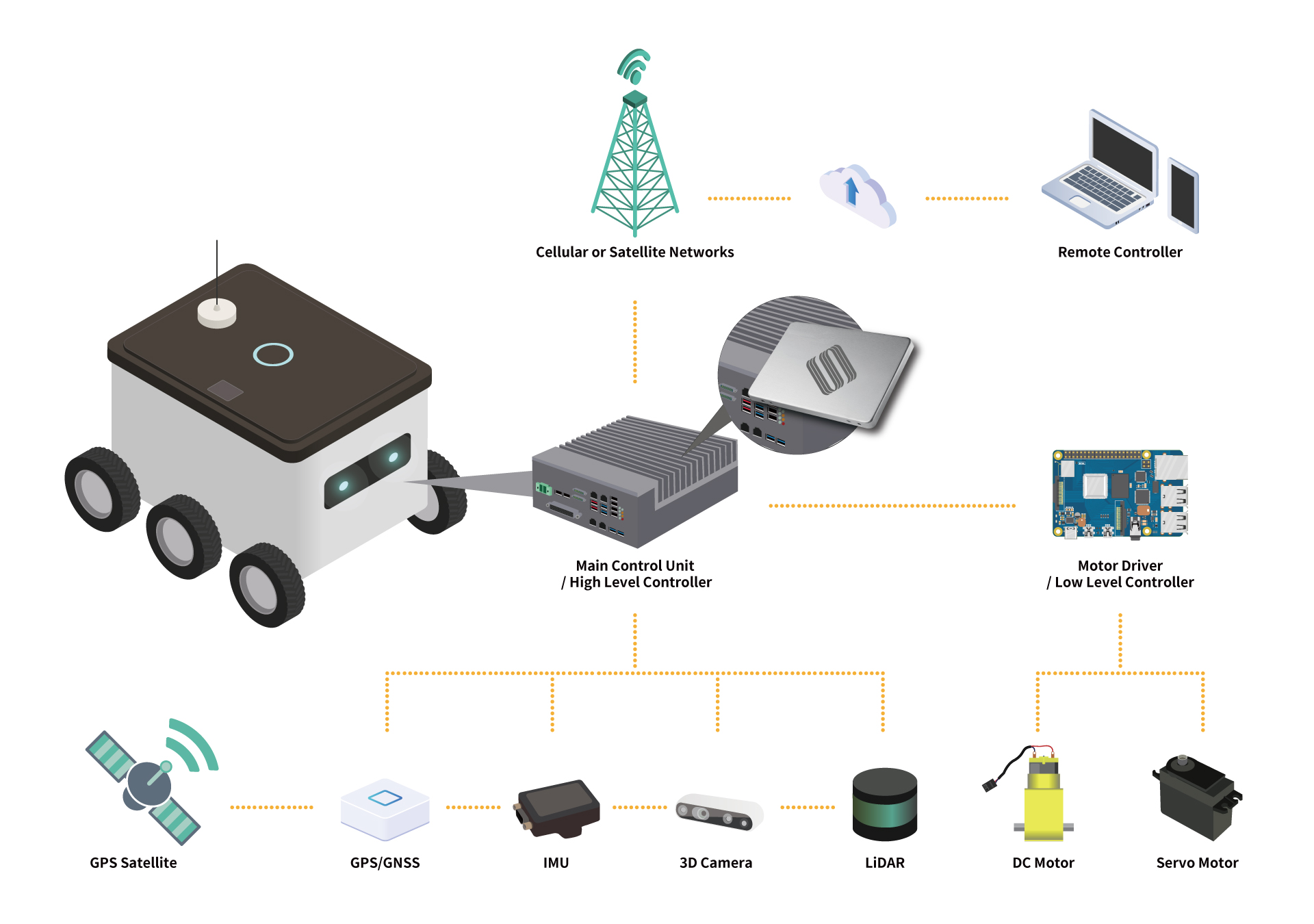 As the AMR applications have extended from the indoor to the outdoor domains such as ordinary roads or pedestrian paths, driving safety and stability have become especially significant. AMR complemented with SSDs produced by Solid State Storage Technology Corporation can increase system stability, as SSDs do not have the inherent shortcomings of HDDs in lacking the shock-proof and vibration-proof characteristics. The SSDs produced by Solid State Storage Technology Corporation comply with the Anti-Vibration standard of the US military-grade standard, MIL-STD-810G, and Anti-Shock standards of the US military-grade standard, MIL-STD-202G and MIL-STD-883, withstanding vibration from driving on uneven road surfaces, or even the shock caused by encountering pot-holes or collisions with road obstacles.

Outdoor-roaming AMR must feature surveillance and recording functions to monitor and record the detailed journey. Given the necessity of storage capacity and speed, the large-capacity SSDs with high read-write speed produced by Solid State Storage Technology Corporation are most suitable for real-time video storage. Apart from the larger storage space, the read-write speed of SATA SSDs by Solid State Storage Technology Corporation is five times faster than those of the conventional HDDs and those of PCIe® 4.0 NVMeTM SSDs are sixty-eight times faster.

Through a renowned US AI software and AMR developer, the SATA M.2 SSDs produced by Solid State Storage Technology Corporation have been introduced in the world’s largest retailer to feature in the autonomous mopping robots operating in supermarket chain stores supporting the in-mall sanitation tasks.